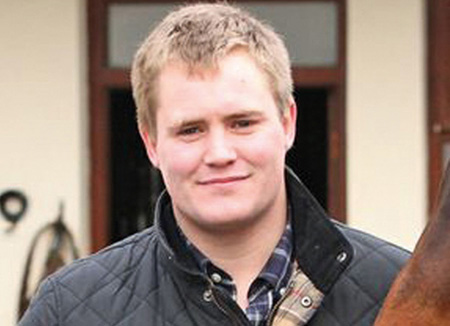 Barry Lynch grew up in Fermoy, Co Cork. His passion for horses started from an early age as he competed at various different disciplines throughout his youth. Growing up around his families breeding operation he caught the racing bug by following the various horses bred by his parents. Beaver Patrol, Close To You, and Lillie Langtry where just some of the top horses they bred.

Barry attended boarding school at Glenstal Abbey. He then went on to University Collage Dublin where he studied business and law. He had kept his interest in the racing game by working various summers with farms such as Grove Stud, Corrin Stud and his own family farm.

It was after university that Barry was accepted to the prestigious Darley Flying Start course. The two year graduate program gave Barry a great background in the racing industry where he got to work all over he world including America, Australia, England, Dubai and Ireland.

Barry gained experience working outside Darley on 4 different placements while on the flying start. He spent time with the trainer Eddie Kenneally in the America, Vinery stud in Australia, Marco Botti in England and Falcon associates  and John Hyde stables in Dubai.

After the Flying Start Barry worked for Lillingston Bloodstock for 5 years. While he was there, he purchased several top horses including Sruthan, Madam Dancealot, Lady Penko, Keenes Royal (dam of Ivawood), Mount Nelson (as a stallion), Barleysugar, and many other successful purchases.

After 5 years Barry felt it was time to start his own business. It got off to a flying start as the first horse he bought won his first start for new connections – Beat the Bank was bought out of a Dundalk maiden where he went on to win a hot conditions race at Newmarket.

It is only the beginning!